Amazon Inc.is known as one of the best shopping websites regardless of anyone’s opinion. The website is famous for a lot of things be it the wide range of books available, fast shipping, customer services and more. It is mostly known for this site and the products it offers. However, it is so much more than that. It is not only an American electronic commerce but also cloud computing company, based in Washington, Seattle. The founder of this incredible company is Jeff Bezos who started in the company in his garage. The company came into being on July 5, 1994. Did you know that now this company has grown exponentially and has warehouses bigger than 700 Madison Square Gardens?

Well, this is not it! There are several more amazing facts that you should know about Amazon. In this post, we have listed some of the less known facts about Amazon Inc.

1. Did you know why the name “Amazon.com” was chosen?

Jeff Bezos had two reasons for choosing Amazon.com: First one was to indicate scale and the other one was then website listings used to be alphabetical and sure Bezos wanted the company to list first.

2. Did you know the company started from a garage and now has huge warehouses?

Amazon possesses warehouses which have square footage more than 700 Madison Square Gardens and has a capacity to hold water more than 10,000 Olympic Pools. Isn’t it amazing? 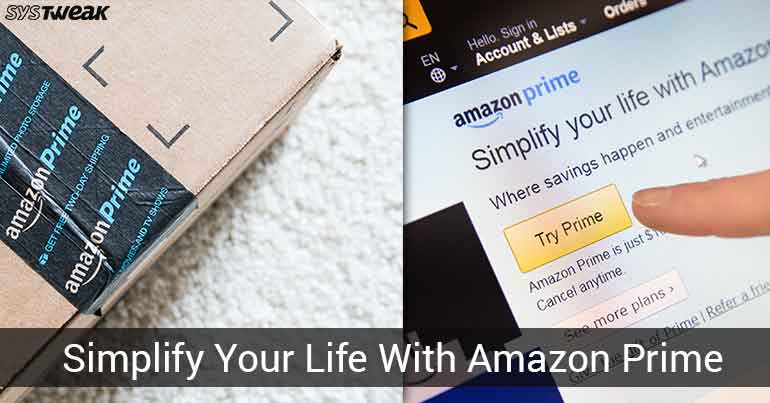 5 Perks That Come Along With Your New...When it comes to shopping there’s no place better than Amazon, right? But not just shopping here are the 5...

3.Did you know, at first it was just a bookstore?

When the website went live for the first time, it only sold books. The first book, Fluid Concepts & Creative Analogies: Computer Models of the Fundamental Mechanisms of Thought in 1995. was sold from Bezos garage.

4. Did you know: How Was Name Originated?

Wouldn’t it be funny if the company would be called “Cadabra” as in “Abracadabra” instead of Amazon.com? However, the idea was dropped as CEO Jeff Bezos’s lawyer didn’t hear the word correct. He heard “cadaver” instead of “Cadabra.”

Tips And Tricks To Make Amazon Prime Video...Amazon Prime video is full of best shows and movies, but to make the best of it, you need to...

6. Did you know: Once Amazon was tricked by customers

In the early days of Amazon, due to a big programming error, customer tricked Amazon into crediting money to their credit card. All they had to do an order negative quantity of books and Amazon will send you the money. Later, the error was fixed.

7. Did You Know the Story Behind Amazon’s Logo?

Logo of Amazon has a very deep meaning to it. It shows the dedication the company has for customer service. It depicts, “This signifies that the company is willing to deliver everything to everyone, anywhere in the world.” the arrow mark starts from A of Amazon and approaches to Z in Amazon, which means you will get everything at the store.

8. Did You Know: It has more unique users than eBay

Amazon has five times more valuable unique users than eBay. According to sources, Amazon’s average unique users gives a profit of approx. $189 however, eBay ’s brings in $39, which is quite a small amount as compared to Amazon.

9. Did You Know: It didn’t get the success overnight

How to Remove Items from Amazon Browsing HistoryHave you ever noticed that Amazon utilizes your shopping and browsing history to enhance your shopping experience? Here is how...

10. Did You Know: Why Amazon Hires during Holiday Season?

After the 1998 crisis, wherein there was a massive shortage of staff and a lot of people from staff had to take a graveyard shift in the fulfillment centers so that they could fulfill the demand. Moreover, they bought their friends and family for help as well. That’s why Amazon now practices hiring seasonal workers to meet the demand at the holiday seasons.

11. Did you Know: Amazon Has More Employees Than Microsoft?

According to the reports in 2017, Amazon has 566,400 full and part-time employees and the company has no plans of stopping the expansion.

12. Did You Know: The fulfillment centers of Amazon are huge

The fulfillment center in Phoenix, Ariz is 1.2 million square feet and one of the employees reported that he walked approx. 11 miles per shift.

13. Did You Know about the acquisitions done by Amazon?

Once Amazon became an established brand, it started expanding. In 2009, Amazon.com acquired famous online shoe retailer Zappos.com worth $1.2 billion.  According to facts, Amazon has a share of 10% of North American eCommerce, such as Dell, Walmart, Sears, Office Depot, Liberty Apple, and Staples. In addition to this, in 2013, Bezos purchased The Washington Post for $250 million.

14. Did You Know: What Its Former Employees are Doing?

Amazon is not only a successful company but is also a good learning place. Many of the former Amazon employees own successful businesses. Some of them are Quora’s Charlie Cheever and Hulu’s Jason Kilar

15. Did You Know: Amazon was accused of falsing calling itself “Earth’s Largest Bookstore”?

In 1997, Amazon was sued by Barnes & Noble on Amazon’s claim of being Earth’s Largest Bookstore. However, both the parties reached a settlement out of court and Amazon continued using the slogan.

So, these are some of the amazing facts about Amazon that you should know about.

8 Amazon Fire TV Tips and Tricks To...Fire TV allows you to watch all your favorite content in 4K HD quality and a lot of games too!...