Home » How-To » How To Run Windows On Mac

How To Run Windows On Mac

Mac is renowned for safety and smooth operation. However, if you are not switching from your Windows to Mac, because you don’t want to lose the programs compatible specifically with Windows, then you must know that there is a workaround with which you can run those programs.

You must be thinking what a virtual machine is and how it works! So, without any further ado, let us know about Virtual machines!

In simple words, a Virtual machine (VM) is a program or image which acts an emulation of a computer system. It is one of the best methods to run Windows on a Mac, eliminating the need for actual physical hardware. With VM, a user can install Windows, Linux or any other OS in a window on Mac. Windows stay under the impression that it is running on a real computer however, it is running within software on Mac.

The Virtual Machine is based on computer architecture and operates as a physical computer. It runs in a window just like any other program on a computer, which provides a similar experience on Virtual Machine as they get on the host operating system. The software inside the Virtual Machine can’t tamper with the computer settings as the VM is sandboxed from the rest of the system.

Therefore, the virtual machines are an ideal software for those who want to use another operating system for testing beta releases, creating OS backup, accessing infected files and more. Every virtual machine has its own virtual hardware that’s CPU, hard drives, network interfaces, and other devices.

The VM is linked to the actual hardware on a physical machine which reduces the costs, as you don’t need physical hardware, hence, no maintenance costs applied to it.

Now you know about Virtual Machines, then read further to know some of the best ways to run Windows on a Mac using virtual machine apps. 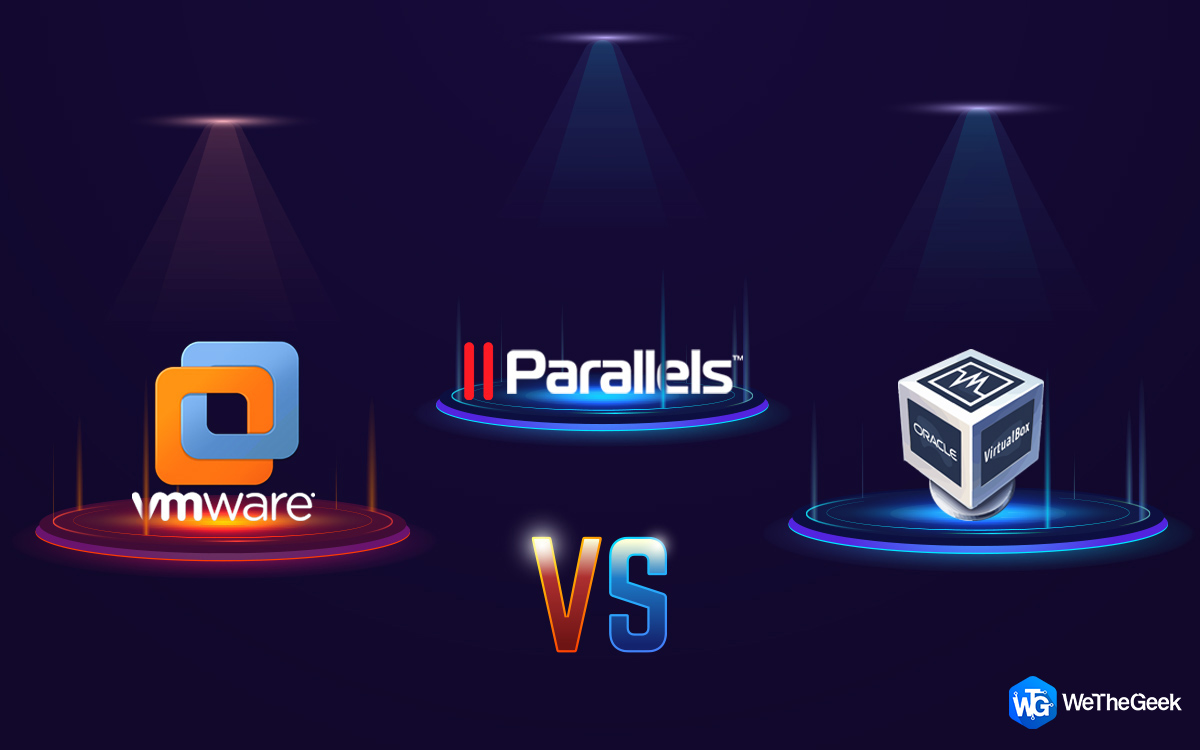 VMware Vs VirtualBox Vs Parallels: Which One To...Getting a Virtual Machine software for Mac depends on what purpose you need it for. Read this to know whether...

One of the best ways to run Windows on Mac is by using Parallels. Whether you want to switch from Windows to Mac or want to transfer data between them, Parallels can do it all. The tool is available for trial and you can get all of it in the paid version.

Let’s check the requirements to run Windows programs on Mac.

The tool is available all mentioned operating system of Mac in the list:

Using Windows and Mac on the same screen on your Mac computer is easy with Parallels. It makes sharing files and folders, images and text between Mac and Windows apps effortless.

Once downloaded, it is easy to install and get started with another operating system. No matter how heavy a Windows application is, it will run smoothly without affecting your Mac’s performance.

The program works for both the latest version of Windows 10 and macOS Mojave. For easy access, it enables a user to add Windows application to Touch Bar. Parallels has the potential to optimize VM settings and performance for you, to match up the current mode. So, whether you are playing games or are into testing or development, Parallels will modify VM settings as per the need.

Vmware Fusion gives you the power to run Windows and other operating systems side by side with Mac apps, without even rebooting. The platform is quite simple, therefore could be useful for home users and is powerful to be handle developers, professionals and businesses needs.

To install Vmware Fusion on your Mac to run Windows, you need:

VMware Fusion comes with an updated user interface along with customizable support for the latest Touch Bar enabled Macs. The tool supports the latest versions of Windows 10 as a virtual machine running on your Mac. Vmware Fusion has an ability to drive complex, GPU intensive applications and games with an improved hardware-accelerated 3D graphics engine by taking advantage of Apple Metal graphics technology.

When it comes to graphics performance and accuracy, VMware Fusion leads the way. With Unity View Mode, it allows you to hide Windows desktop, so you can run Windows apps on your Mac seamlessly.

This app allows you to launch Windows apps from Dock, Launchpad or Spotlight. With the common VMware hypervisor, Fusion makes it simple to transfer virtual machines back and forth with drag and drop or control VMs right from corporate data   from the comfort of your Mac 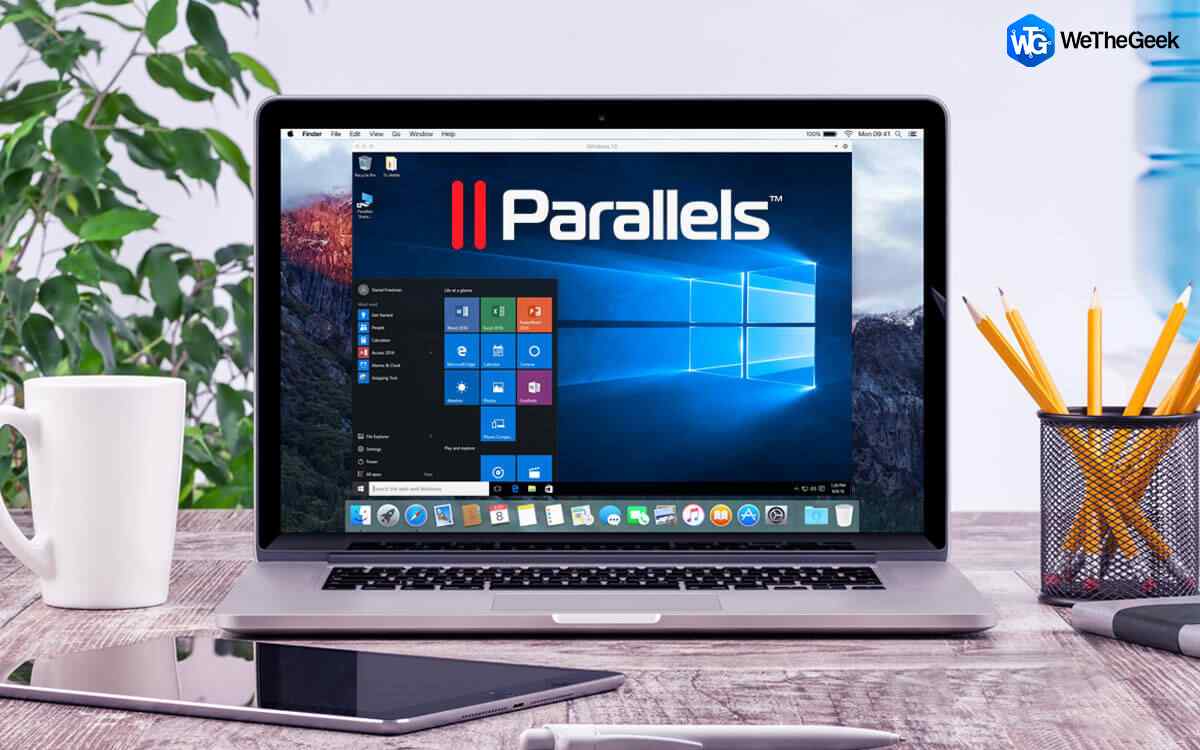 How To Get Windows On Mac Using Parallels?If you want Windows and Mac on same screen without lowering your productivity and performance of the system you can...

Bootcamp is an inbuilt utility app which enables Mac OSX user to use Windows on the same screen. The app is easy to use and after installation, you just need to restart and switch between Windows and MacOS to run Windows on Mac.

Before you get started with it, let’s check the requirements to run Windows programs on Mac.

Note: It is recommended to have 128 GB space for better performance.

Bootcamp is popular due to its performance. Having Windows on an internal drive of Mac eliminates the need for a virtual machine or external device. If you have ample space on your Mac, you should install Windows using this utility app.

Upon installing Windows on your Mac, you could use Windows & its applications with best possible performance. Your Mac and Windows PC both will perform with the same specifications. Install Windows using Bootcamp and enjoying using both platforms on the same screen.

If you want to run Windows on Mac, without even rebooting your computer, then VirtualBox can help. VirtualBox is a free and open source hosted hypervisor for x86 computers.

If you want to get Windows 10, then you need to check the Installation requirements:

It lets your guest system to directly access the USB devices connected to the host computer. You can set Shared Folders which can be accessed by both guest and host operating system. Copy, paste, drag and drop the files from guest to host or vice versa easily.

If you want to run server software inside the Virtual Machine, then VirtualBox allows you to set up port forwarding. Running VM on a remote system or server is possible with VirtualBox. The tool makes it possible with the help of VRDP which is backwards compatible with Microsoft’s RDP protocol. So, you can establish a remote connection to your VM by using the Remote Desktop Connection program(Windows program) without any VirtualBox app.

3 Simple Ways to Run Windows on MacDid you know you could run Windows applications and programs on your Mac as well. That too, without spending an...

Wine originally means Wine Is Not An Emulator. The app is based on Linux. It is a compatibility layer that enables Windows applications to run on other operating systems. It is open and legal and is available for free. Also, you don’t need any Windows license to use the tool.

To install Wine on your Mac, you will need to have the following things:

With Wine, Mac and Windows run side by side and you can switch between the two via Boot Camp. However, you need to reboot your computer every time you switch. Unlike other apps used to run Windows on Mac, Wine doesn’t take up a lot of disk space and doesn’t hog memory.

As it takes permission to use system resources such as disk space and memory from OS. Wine makes sure all the requests are responded so that the program can run properly. Therefore the programs get all the connections to work properly and it doesn’t feel that it is not on Windows. As it is only interpreting requests, no need to copy real Windows OS. Being an open-source, Wine is continuously refining and new features are added to it now and then.

So, these are popular ways to run Windows on Mac. We know it is not as easy as installing Windows apps on Windows computer but with these apps, you can beat the need of having two operating systems on two separate machines, instead, you can have both of them on the same machine.

Which One To Choose?

If you have a Windows license and want the best compatibility on your Mac, then you must go with Parallels.  However, don’t have or don’t want to buy Windows license key then you can use Wine to run Windows on Mac.

Well, this was our opinion on how to run Windows on Mac. Did you like the article? Please share your thoughts in the comments section below.